The Emergence of Teeth Into the Mouth

When do baby teeth come in?

Average ages for tooth eruption of primary and permanent teeth. 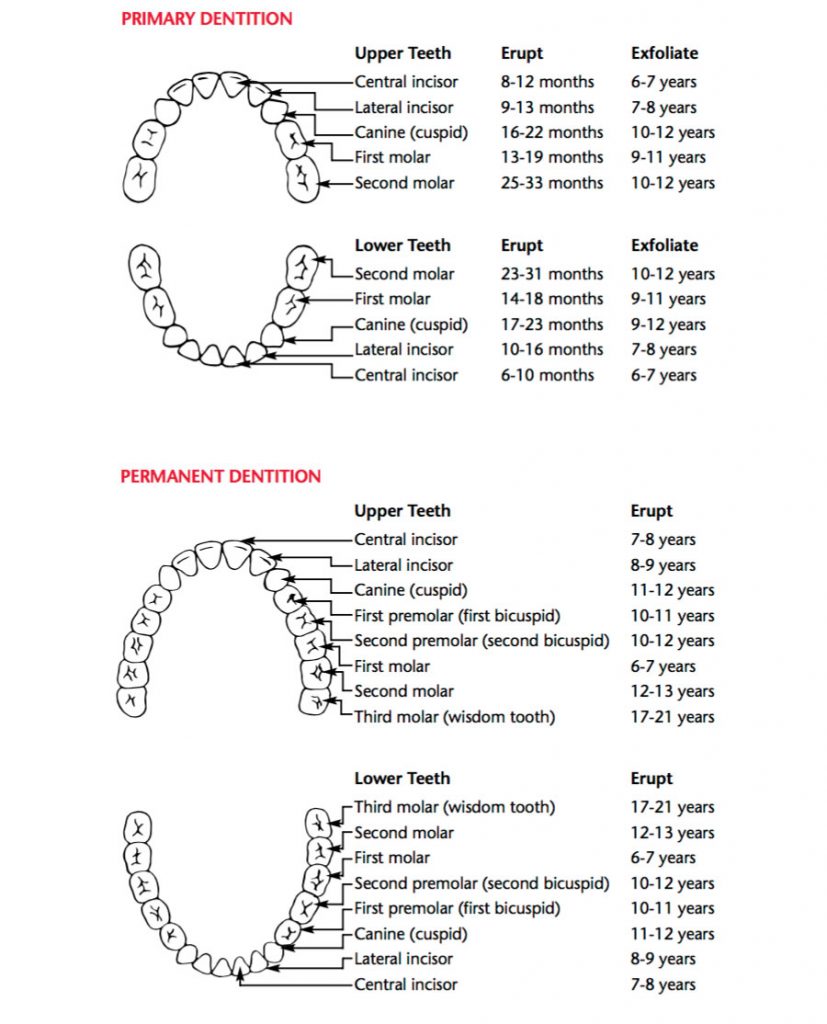 The first baby teeth that normally come into the mouth are the two bottom front teeth. On an average, you will notice this when your baby is about 6-8 months old. Next to follow will be the 4 upper front teeth and the remainder of your baby’s teeth will appear periodically. They will usually appear in pairs along the sides of the jaw until the child is about 2 1/2 years old.

At approximately around 2 1/2 years old your child should have all 20 teeth. Between the ages of 5 and 6 the first permanent teeth will begin to erupt. Some of the permanent teeth replace baby teeth and some don’t. Don’t worry if some teeth are a few months early or late as all children are different. Females have a tendency of an earlier eruption pattern than males. Eruption is also influenced by genetics and family history.

As teeth begin to erupt your child may become irritable, sleepless, and might have a loss in appetite due to tender and sore gums. Here is a great teething video that has tips on how to deal with a teething baby.

• There’s little evidence of a relationship between teething and systemic illness. Teething problems may be treated with application of a cold soothing teething ring or a cold rag.
• Eruption is usually symmetrical and delays of more than 6-12 months should be evaluated. Early or delayed loss of primary teeth can be a concern.
• At about the same time the first primary teeth begin to exfoliate (“fall out”), the first permanent molars (six year old molars) may be erupting.

Remember, early tooth loss caused by dental decay has been associated with failure to thrive, impaired speech development, absence from and inability to concentrate in school, and reduced self-esteem. If a child is in agonizing pain from a dental problem, it may affect the child’s school attendance, mental and social well-being while at school.